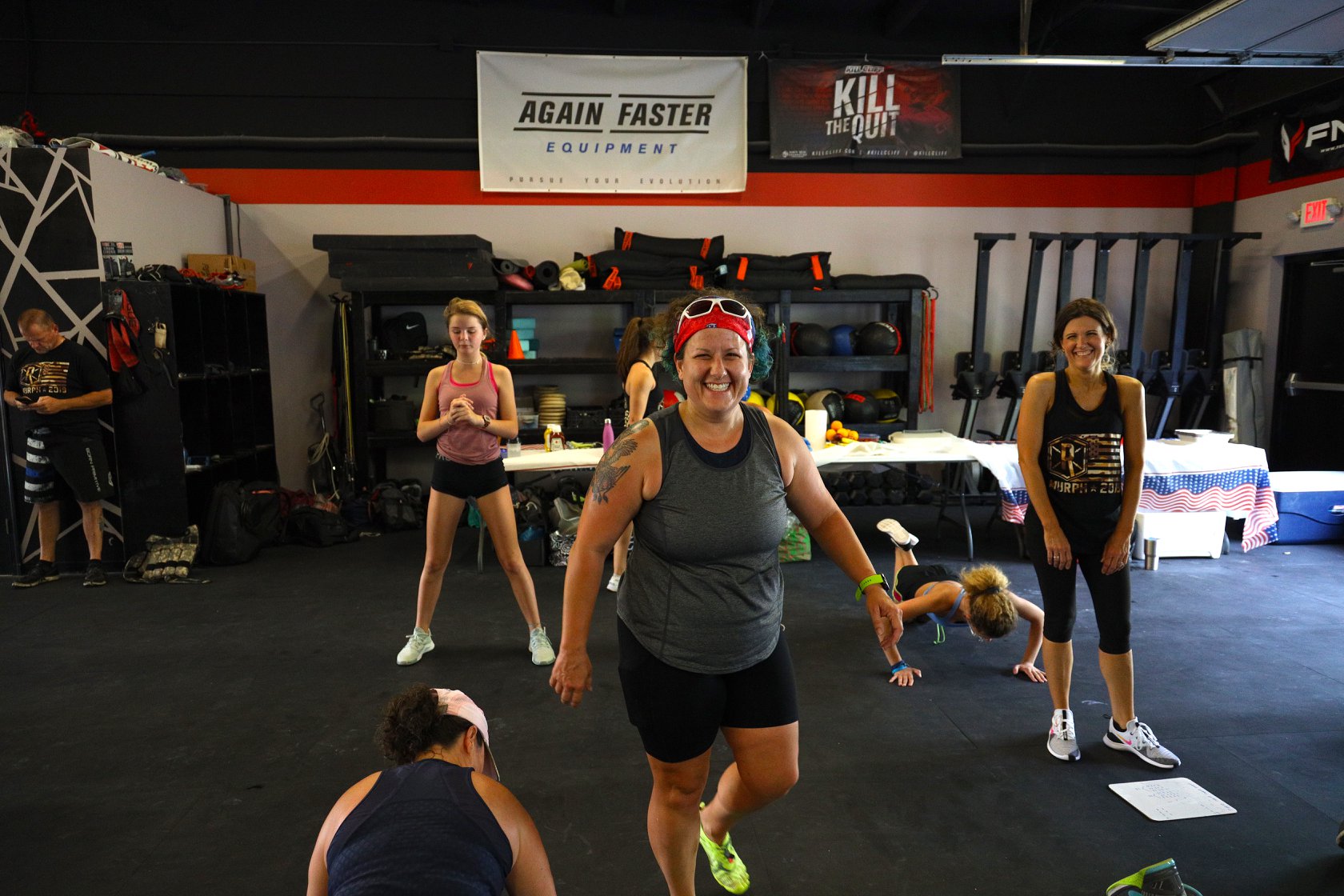 Jenny Goguen has been a long standing member of the CFR community and we’d love to recognize her this month as the spotlight athlete! Jenny is one of the most kind-hearted (and colorful!) people we have ever met and we absolutely love her friendly, fun vibes she brings to class. Jenny always comes in with a good attitude, colorful shoes and a contagious laugh! She listens to coach’s cues and advice; and we’ve seen her progress and get stronger over the years. We are extremely proud to have her as a friend and member at CrossFit Rolesville! 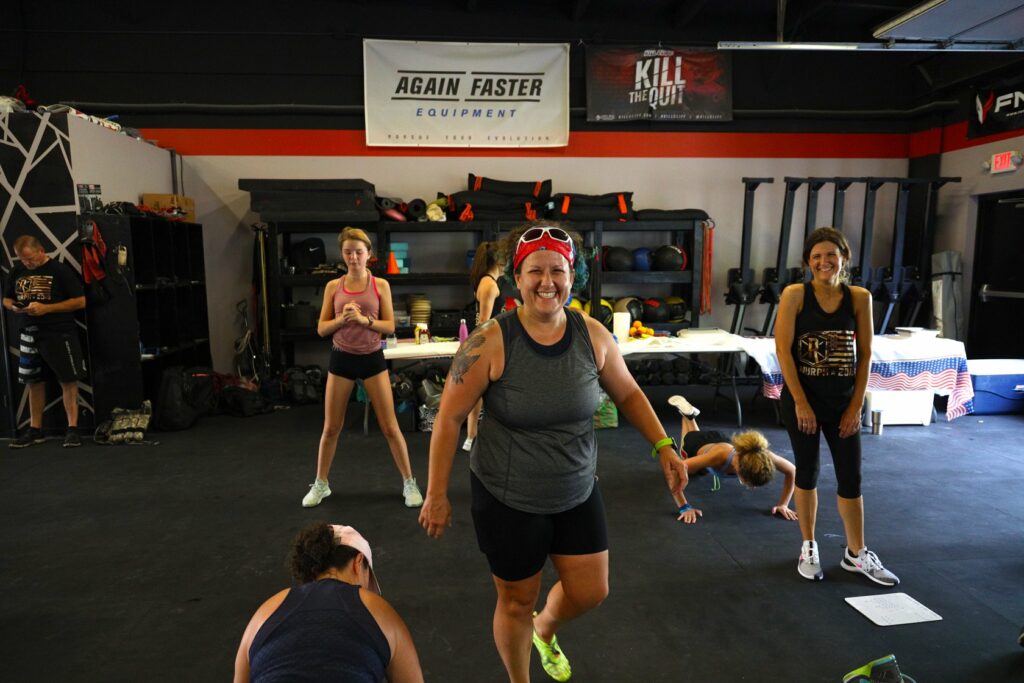 Proudest accomplishment at CrossFit Rolesville? Being able to jump on an actual box. Anyone who has worked out with me on a box jumping day, knows I have a ridiculous phobia of jumping on things. The first time I was able to jump on that tiny 12” box was huge. I’m still only able to jump at that height, but one of my goals this year is to get to at least 16”.

How did you find CFR? Why do you train?I was the Membership Director at Granite Falls and when I left that job, I knew I needed to find somewhere else to work out. I’m fairly competitive and was never good about doing weights on my own or even in an normal “fitness” class, so I told my husband, Josh, that I was ready to try out CFR. He had done Crossfit when we lived in another city and I remember him saying how the workouts were only like 15min. I figured, “that sounds easy- let me try that!” Little did I know… The great part was that Josh decided to check it out with me to make sure the trainers weren’t wacko and he ended up liking them so much, he joined too, followed by his brother, SIL, and my best friend, Susan. 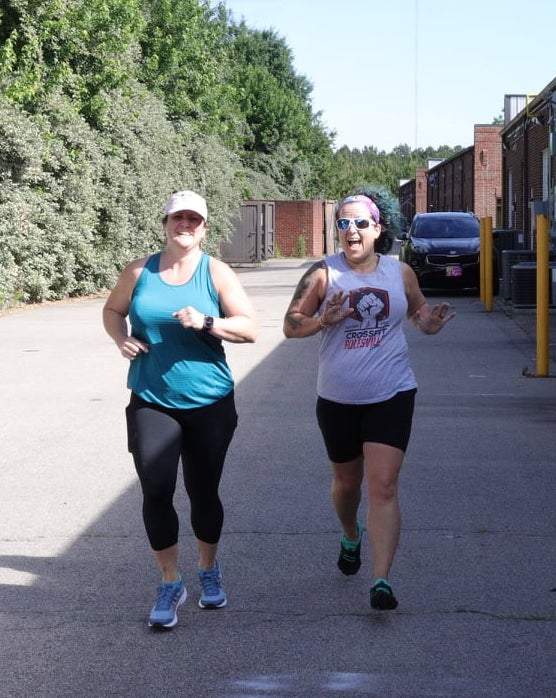 
What is your favorite moment so far at CFR? I don’t have a definitive moment in mind- I just really enjoy the chatter during the 9am class warmup. I love hearing everyone giving each other a hard time, going on tangents about soup or Thomas’ socks. It’s just fun and a great way to start the day.

What is your daily motivation to workout? I have struggled with my weight almost my whole life- if it wasn’t for working out, I would be well over what I am now. The past 6 months have been tough and I’m now having to fix the problems I’ve created for myself. So, I remember that when I don’t feel like getting up or doing anything. When I look in my closet and I can’t wear 90% of what’s hanging up or I’m on the verge of hulking out of my Cub Scout leader shirt. As I’m working through this though, I know I will also start to be motivated by other, non-weight-related aspects of working out- getting back to that better- stronger- faster stuff. Then, it will be way easier to get out of bed- literally. 🙂

Favorite and least favorite movements? Favorite movements are Deadlifts (but not Samurai (aka Sumo) ones- no bueno on those), Running!, and anything with the Wreck Bag. I’m really not good at anything else LOL… but if you need the ones I’m least favorable towards, that would be pullups, T2B, and almost every lift where the bar has to go over my head.

What’s one thing you would tell a new CrossFitter? Don’t compare yourself to the fastest guy or gal- especially in the beginning. Find that name on the board that seems to match your current abilities and play alongside them. I love having “secret competitions”- I’ve raced against so many people during 5Ks to Full Marathons (and won like almost every single time, of course), but the best part was that almost none of them knew we were even competing. LOL

One song that gets you amped up during a WOD? It changes all the time, but the one song I begged Thomas to tell me the name of when it came on a few years ago was “High Hopes” by Panic! at the Disco. I still love that song and it’s actually pretty motivating. It’s also a lot of fun to play on Beat Saber.

Tell us something about yourself that we don’t already know. Hmmmm… most people won’t know this outside of the 8/9am classes, but I was a dancer/participant in Richard Simmon’s “Sweatin’ to the Oldies 5” and was also on QVC with him twice to help promote his Sweatin’ to the Oldies box set back in 2009. Definitely a fun little time in my life. 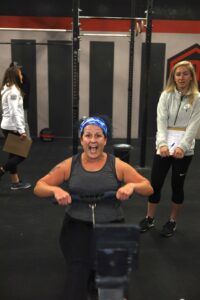